Our final full day in the Golden City started off routinely well. It looked like the sky was clearing up a bit and even though that wasn’t supposed to be a busy day, we still had a few things to look forward to. Our breakfast got us ready to walk the central Prague again and drop in to a few shops on the way. Just to experience a typical Prague morning and be astonished at the thought of not having to join in the daily commotion. The Old Town was mine last but one time and that got me wondering how many more beautiful photos of me posing in its different parts had I been given more time to spend here. We had a mission though, which was to climb the Old Town Tower to get a bird’s view of all of the spires and get inspired as I’m hugely fond of this type of sightseeing. We had a bit of a difficulty finding the entrance to the Tower but we did get there a bit later. The wind was feeling a lot chillier from up here.

The Astronomical Clock stroke 10 but this time we could only hear it echoing in our ears as we were making our way all the way up. There was almost no one up here except us. The famous red roofs of Prague, I fell in love with you and I didn’t mind the wind sweeping off my hood and messing with my freshly done hair. I was happy to be struggling through the wind to see them. How many times will I find myself pondering over their beauty and magic charm as I am at my university building reflecting over my life choices and where they are taking me. How many times will I have to remind myself those roofs I can see are part of my daily routine which makes it obvious I’m not in Prague… But I was in Prague for now. The spires of the Týn Church and their maleficent glory, the Prague Castle looming away, the Wenceslav Square far off, the hills, and roofs and roofs and roofs. I felt free and alive, nothing fundamental that would tear me apart but just as much as you are supposed to as you are breezing through your daily routine.

We started making our way all the way down and even had a souvenir coin made for us after a bit of linguistic misunderstanding…. Another walk to the Charles Bridge, more people-watching and another look at a charming man who would see at one of the shops for two days running doing something a man isn’t meant to do – making aprons and smiling courteously. I bet he had no idea how cute that looked to see him at work! More views of the Charles Bridge – I could well get used to having it as part of my Prague existence! There were so many more little details to take in and I didn’t want to let go and let myself just leave the next day.

We made it down to ponder our existence some more outside the Franz Kafka Museum and I felt a child inside me rejoicing as I found the area around it virtually deserted, which meant a lot of photo opportunities. That was cheeky, Prague style. On my first visit here I remember seeing “The Two Pissing Men” by the same David and how bewildered I felt having seen something like that in Prague. Little did I know, I would get to know Prague a bit more intimately and there would be no questioning and amazement whatever I saw. These two exposed men were for me feeling resentful and that pretty much described the way I felt about going back home to what I’d been trying to get away from. 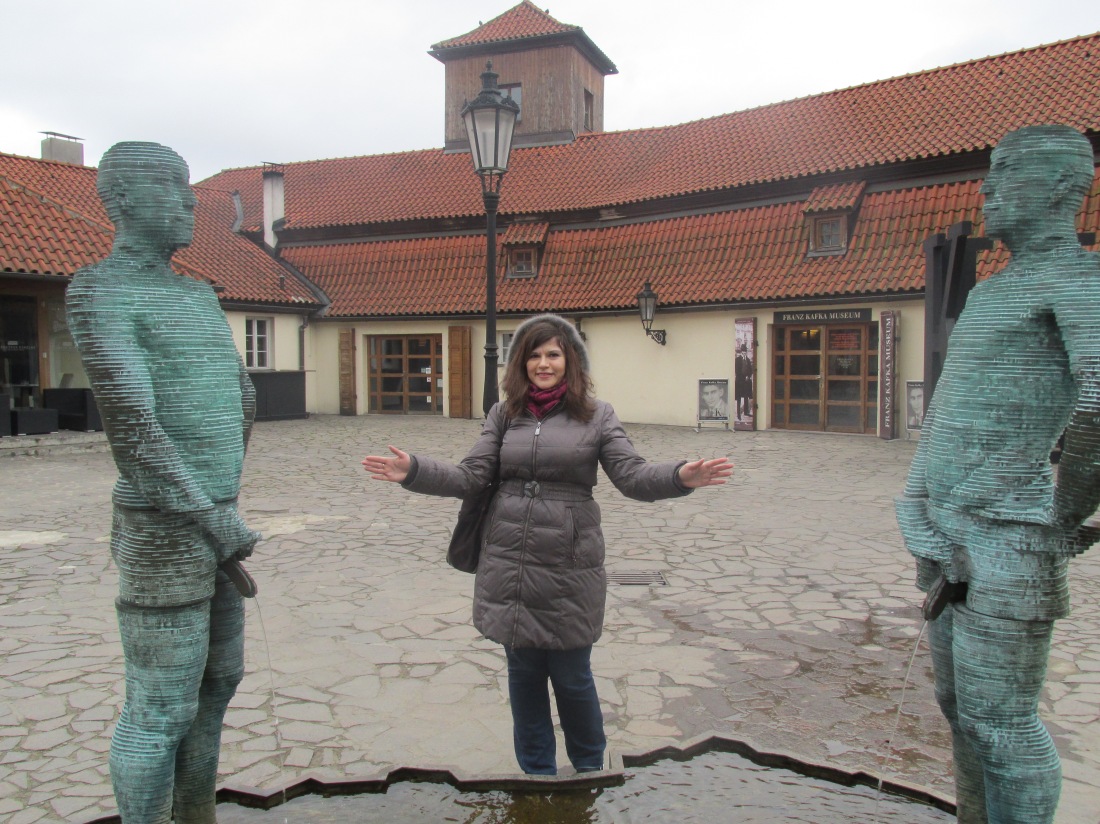 We stood here for a little bit more and got inside the Franz Kafka Museum just to see a few souvenirs.

As we were walking down to the Vltava bank, we recognized the very street we were walking about two years ago because there was this particular beer place I was dreaming I could visit back then. It didn’t look quite as appealing on this dreary day but the

recollection of the dream was sweet and warm like a glass of hot wine. We decided to make a more proper acquaintance with the swans. Standing here at the Vltave bank overlooking the Charles Bridge I could feel a kiss of spring on my cheeks. It was on its way and I knew it would find us a lot sooner than we thought! I breathed in but didn’t dare to exhale. How beautiful the world is – the swans, Prague…

We wandered for a bit till we found ourselves in a beautiful garden, which seemed like an amazing retreat. The spring was breathing more distinctly on me now… It felt as if we had found ourselves here by mistake because it had just popped out of nowhere. Magic of Prague… It turned out to be Wallenstein Palace. Peacocks walking around owned the area (or rather their tails dragging behind them did). Just as fast as we found the garden, did we find ourselves outside it. A walk through the Kampa Island brought us back to the figures of the giant babies and this time we got an amazing close up of yellow penguins lining the Vltava Bank. Prague and the Vltava – what a turmoil relationship! 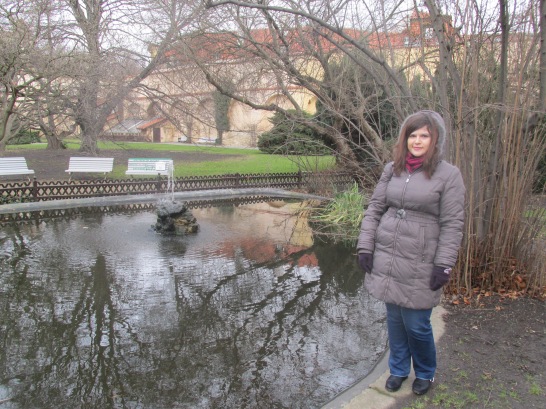 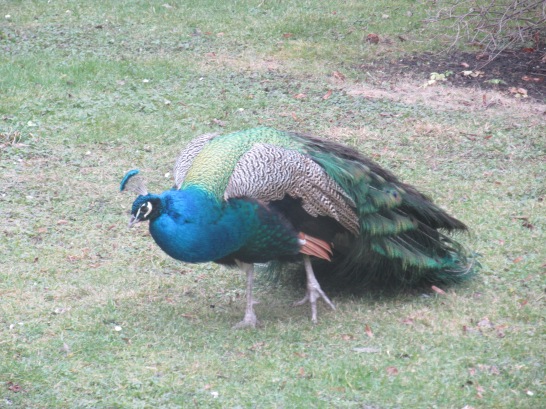 Another mission was to find a recommended place to eat which was somewhere outside the Kampa Island. I found Prague to be quite comprehensible to navigate. There was another life going on here, less fundamentally magic as we moved a bit further off the Charles Bridge. We were moving towards the Petřín Hill. We came across the famous Monument to the Victims of Communism. The figures that were almost invisible as they were missing limbs looked really eerie. 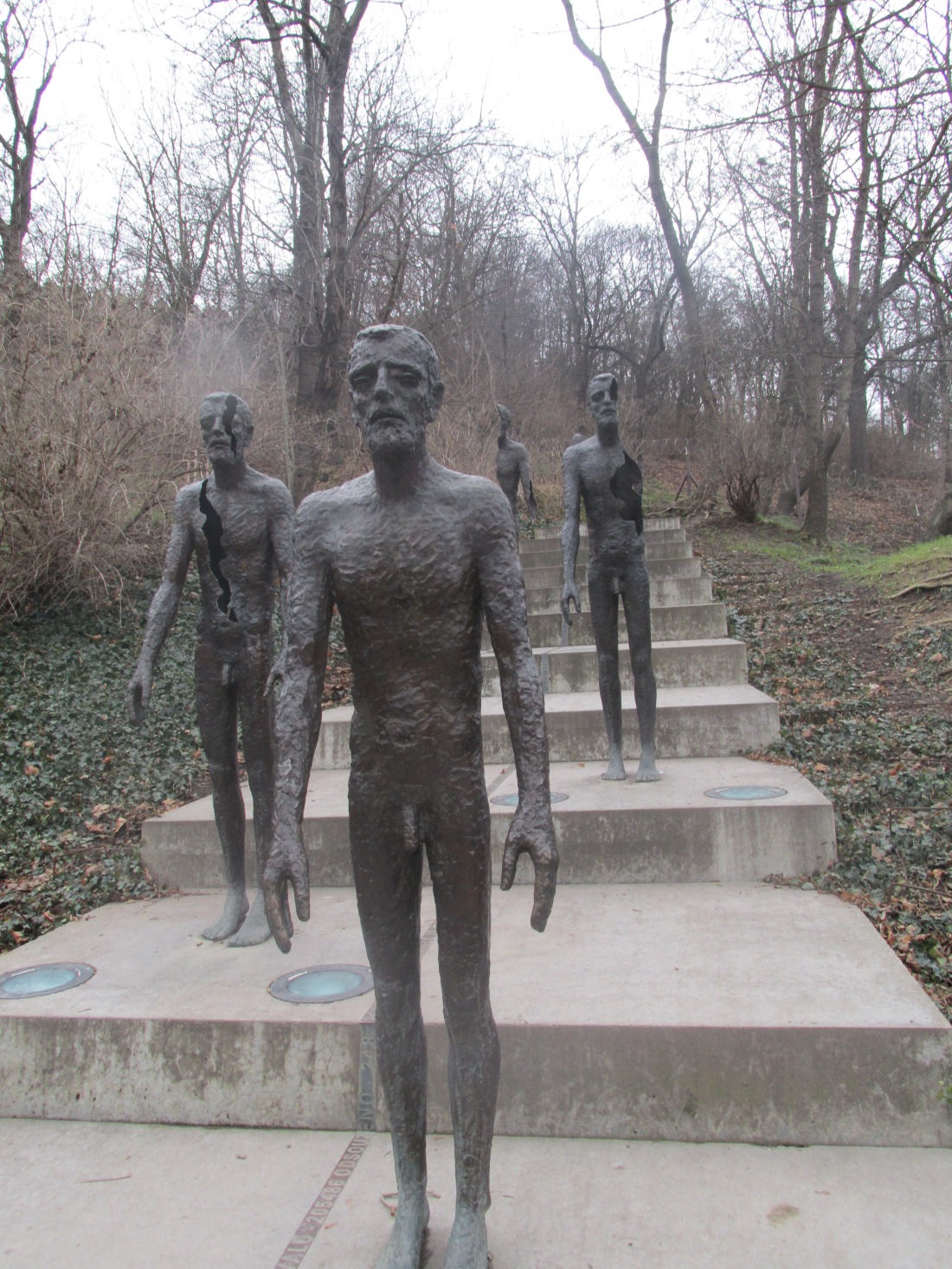 I loved the famous “run down” feeling of that beer place. The meal and the service were amazing and I could resist meat and cheese and “Seven Bullets” (the best beer I’d tried at that point). After the lovely meal and a few reflections over our beers, we decided to burn it all off and walk the Petřín Hill. It seemed sweepingly high but the beers must have blurred our judgment a bit so we avoided using the furnicular to take us up. The sweeping views of the city we got were all worth it! I looked behind me and never wanted to turn away!

My inspiration helped me to encourage my sister to keep walking up as she was getting a bit grumpy about how we shouldn’t have got up here. On that lovely bench we saw being not occupied overlooking the Prague version of the Eiffel Tower (The Petřín Lookout Tower) the world was regaining balance. 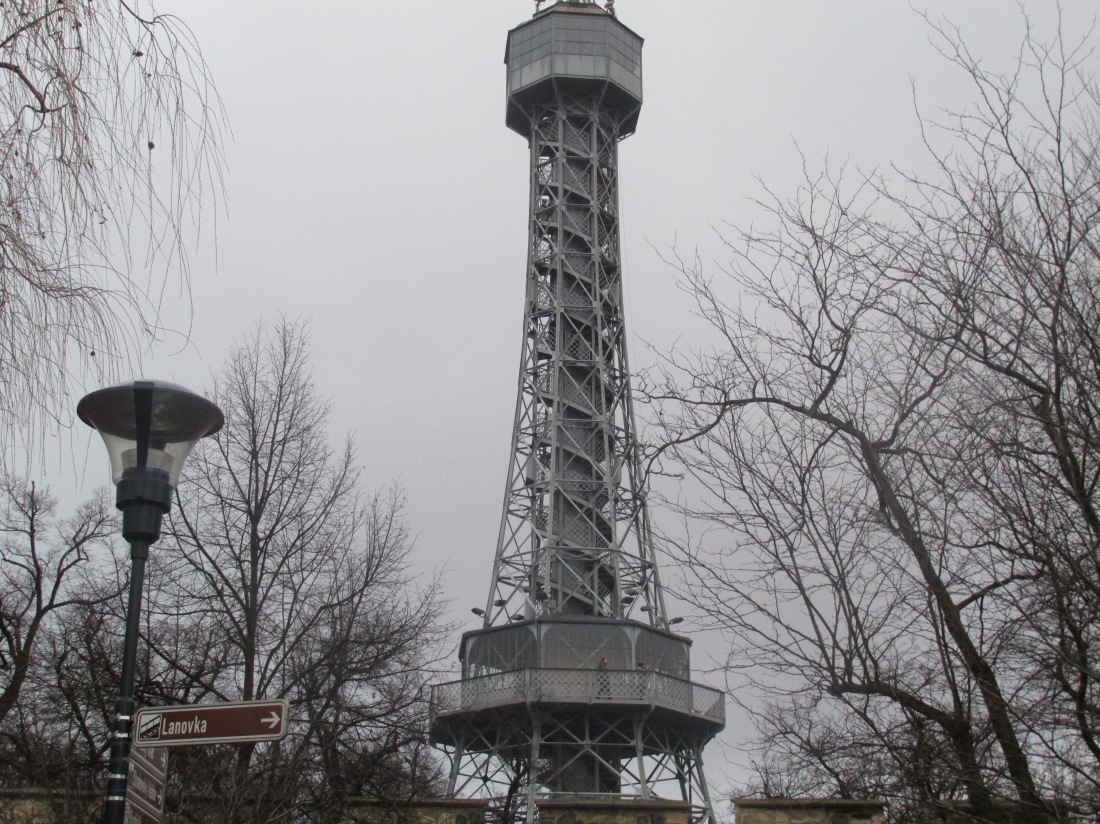 A little bit of peace is always treat after a bit of commotion. It was getting a bit late so we decided we wouldn’t hang around for any much longer. I wish we had walked to the Prague Castle to watch it as the evening was settling in but my sister definitely didn’t feel like it. As we were going down, it started drizzling and that felt a bit nasty and my sister found it very menacing and went into the grumpy mode again… I was happy to have been wearing my newly purchased shoes and felt sorry for her in hers… The views of the Kampa Island and the Vltava with the penguins were amazing! It was all getting sad now and it seemed that it was now time to start saying my goodbyes. Why did I have to leave so soon…? 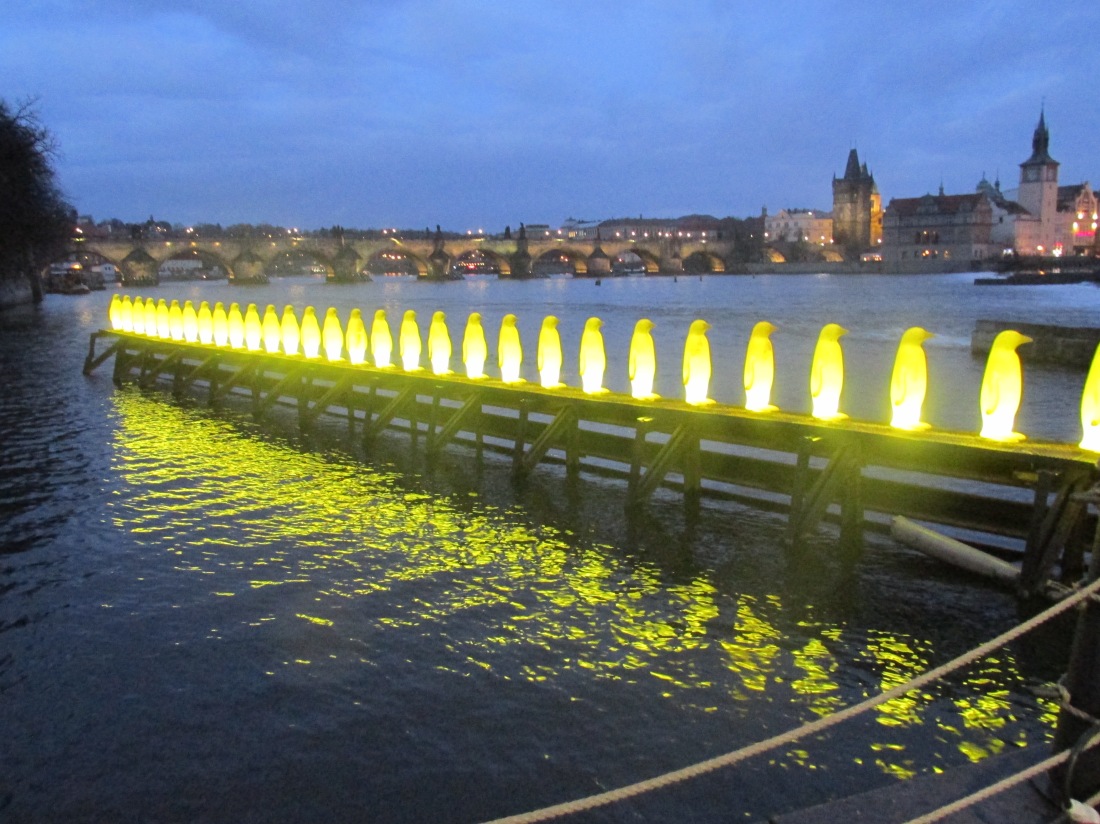 I had that overriding urge to take photos of everything and that was how I knew I was already saying goodbye… The last evening walk through the Charles Bridge… I paused right in front of the Prague Castle and it struck me how good it would have been if I was good at photography. This particular angle was a bliss for photographers and they were some trying to preserve their share of the Prague magic. I was there for a while messing around with my camera. The magic was there and who cared about photography skills at that point… A final round of trdlo and hot wine, views of the evening Old Town… No, it isn’t goodbye yet! Let the magic linger on… 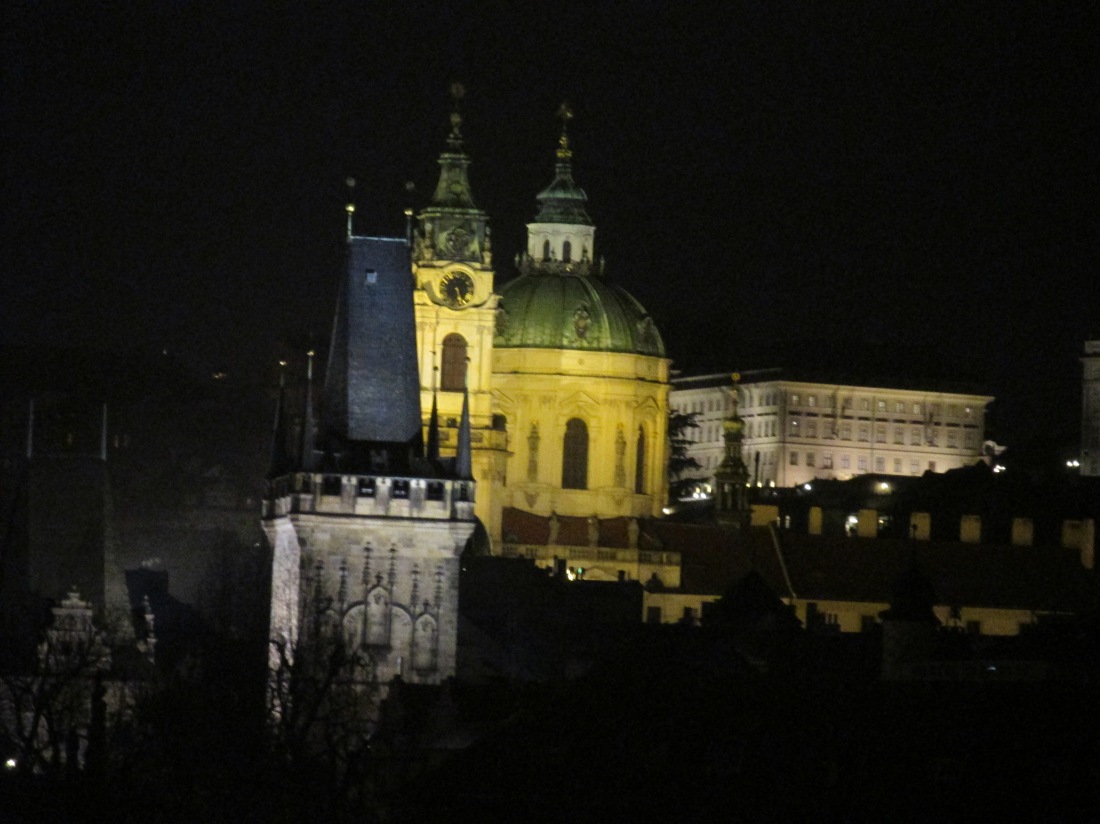 Back at the hotel, we were getting ready to go out on this last night in Prague and head next door to the Beer Museum to get a taste of more kinds of the national drink. Beer had already become our routine drink! As we were getting ready to go out, my sister suggested we might want to feed the leftovers we had in the fridge to the swans when we went to feed them the next day. I have absolutely no idea why but what she said had me rolling with laughter all over my bed! Swans eating sausages! Was that just me or was that really something that didn’t seem quite easy to comprehend? Anyway, we didn’t have to go far and we were happy there was a table for us as the place was packed. I loved watching people there and I knew for sure a bunch of young men showing off were Russians before I even heard them talk… As we were sipping on our newly discovered beers, we watched more people coming and it felt like a privilege! There was an American man talking to one of the waitresses and I was saluting her language skills. A black guy who had passed by a few times came up to us and paid us a compliment. It was so sweet of him! A few nice words are a better catalyst of happiness than beer, for me anyway… With lots of things to smile about, we were getting ready to leave the place as it was almost midnight… Still smiling in my bed, I couldn’t get enough of the radio playing on my phone. That was our last night here in the Golden City. Early in the morning we got woken up by someone singing “Angels” by Robbie Williams at the top of his voice till someone shouted “Hey!” at him. As my sister would recollect, she thought there would be a fight but the singer was quick enough to cut off his singing. My sister was thankful to whoever it was for reminding her she hadn’t put her devices on charge…