It is amazing to wake up to seagulls making weird sounds outside your window and knowing that right there to the left you have the Black Sea even if you can’t see it from up here! The only thing is that it’s a bit cloudy… We were to have breakfast at the same café where we had it the day before when we had just arrived. It was a bit confusing because the staff didn’t seem to speak any English (I guess Russian neither) and we didn’t know we would only need to have to wait to be served. I asked for some cheese (yes, I am a huge cheese lover) and heard something that would break an English teacher’s heart, which went like this “How many cheese?”. Well, this person should have been happy he wasn’t in my class! I have to say that the famous Bulgarian brined cheese didn’t taste too nice and to me didn’t seem like cheese at all. It was just unpleasantly salty. The coffee was average but what made for a beautiful experience was being able to watch different people walking by and noticing that older Bulgarians do look similar to their Russian counterparts and younger people look more European. That was a nice soft duvet with equally soft pillows and of the course on the right – the Sea Garden and the Black Sea! Slivnitsa Street would accumulate lots of memories of our time here in Varna… As it was still cloudy, we decided we would do something I said I had to do on a seaside holiday, which was exploring the city as if there was no sea here. Of course it would be challenging because being the seaside capital of Bulgaria, Varna had a lot to do with the sea but discovering was what we opted to do.

Bulgarian roses have to be one of the largest tourist magnets here. No, you wouldn’t see roses in the streets of Varna but you can smell them in the air! Especially in the air as moist as it was on our first morning here. Roses are beautiful flowers and I might seem a bit old-fashioned when I say that women should be given them as a manifestation of affection. There is so much to choose from to suit any lady because they come in different colours and even shapes. I don’t believe it when someone tells me they don’t like to be given flowers. Yes, I might be typically Russian when I also say that roses feel a little more confidence-boosting when they are given by a man but even if you buy them for yourself, they are nice! We must love ourselves at the end of the day! Varna hadn’t struck me as incredibly romantic (for the moment it seemed just nice) so this wasn’t this aspect of these flowers that they explored but as a country, which is largely agricultural and rural, Bulgaria managed to become the leader of the rose-growing industry and actually about 85% of the world’s rose oil is produced here. Not so romantic especially given that statistically speaking, one needs about four tons of roses to produce a kilo of rose oil! Yes, so many roses could have made ladies happy… But they still do in the shape of beautifully-smelling products such as soap, shower gel, rose water, creams, perfume, etc. That was the smell that brought us to a “Rose of Bulgaria” shop just across the corner in Boris I Boulevard, a pedestrianized shopping street of Varna. It felt as if we were in the Rose Valley itself! All these products were reasonably priced! We would find ourselves dropping in this shop quite often while here in Varna. 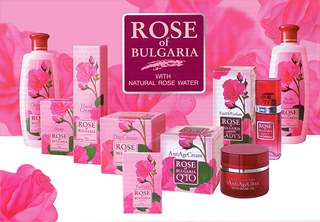 Now we were walking further along this street and yes, that was when I was starting to realize there were things to explore in the fellow Slavic country as well. All these houses looking you straight in the face. Of course there wasn’t an imposing pomp about them that you are very likely to see in central or Western Europe. There was something intimate or even overlooked in this street which to me seemed to have a little Turkish feel as well. The pinkish building of the Drama Theatre seemed quite typical of other Bulgarian theatres I’d seen in photos. An Art Nouveau mansion, St.Nicholas seamen’s church (yes, we can’t forget about the sea) and nothing reminding of the Soviet era in fact! As the street was lined with shops, we decided to check out one as a pair of shoes in the shop window really caught my eye! Yes, red was becoming my favourite colour. I ended up getting two pairs of red shoes and a bag to match! Yes, I now believe that these things are amazing memories of a trip just as much so as souvenirs. What else boosts a woman’s confidence more than a bit of a shopping spree? Yes, I came out of this shop feeling a bit happier to be alive (not that I wasn’t already even though I was in a seaside city covered with clouds).

Having walked a bit further down the street, we found ourselves right in front of Varna’s iconic sight – the Cathedral of the Assumption of the Holy Mother in St. Cyril and St. Methodius (names very familiar to all Slavs as they were the ones who started the Cyrillic alphabet, the alphabet of our Russians’ and Bulgarians’ hearts). To a Slavic person from an Orthodox country, there was nothing surprising about this church, apart from the palm trees surrounding it. We decided we would explore it more a bit later but decided to rest in front of a monument to Tsar Kaloyan of Bulgaria who restored the Bulgarian empire in the 12th century. There is certainly a lot we Slavs have in common because by merely having a look at this monument, I remembered about stories telling the tales of the Slavic tsars and their conquests. I was happy we were probably the last generation that was read books to and then read them themselves! It’s so great that apart from our suitcases, we bring all of this luggage in our heads along with us on our trips. You never know where your mind is going to take you on a trip!

It was quite a dull and cloudy afternoon and we decided to have some lunch and go back to Boris I Boulevard where there was a cosy café with home-made Bulgarian food. Yes, we might not savour the process of eating food like they do in Italy, for example, but we love to make sure we serve plenty! That is a very Slaviс thing! We had something similar to what we call «окрошка» (summer soup) and Bulgarians call it таратор (tarator). We wouldn’t have to explain to them what it is we eat a lot during summer! We also had some chicken in cream (also a lot like back home). It was nice to be sitting here with a view of the St.Nicholas seamen’s church watching some construction work nearby.

We got hold of our first Balkan souvenirs on the way back to the hotel and I particularly enjoyed seeing the national costumes, similar to Russian ones but with a little local touch (which is so subtle that you actually need to be physically in a country to properly feel). It was still cloudy and there was even some rain. No swimming today again, I guess. Right, so that should be a day of exploring the streets of Varna without the sea getting all our attention. We first got back to the Cathedral in search of a post-office for me to post some postcards back to Russia. I think it’s such a beautiful tradition to follow to share a piece of your happiness and whatever other complex emotions you might be having at the moment! That was when we got a taste of the shared Soviet past. The building seemed quite old and the service was slow – very familiar! Now we were in the administrative area of Varna with a big building saying «Община Варна» (The Varna Administration). Yes, it was a bit strange knowing that technically we were in another country but we could read the signs! I would never find out what they seem like to most people in the world! It’s like a little secret we were let into just on the right of birth! There were some fountains and palm trees here in front of the administrative building. Yes, the streets looked rather dull it being a cloudy day and had no charm that is there regardless of the weather. We saw a little protestation right there but had no idea what brought the protestors here. An Evangelic church in the corner… 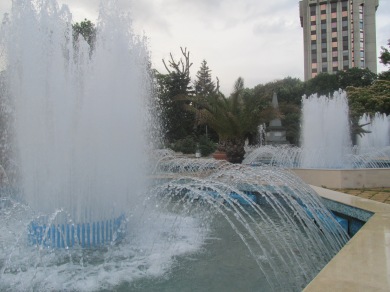 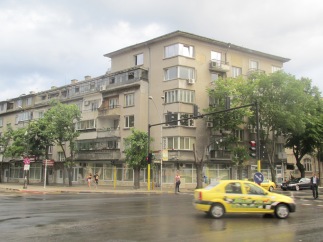 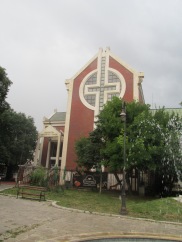 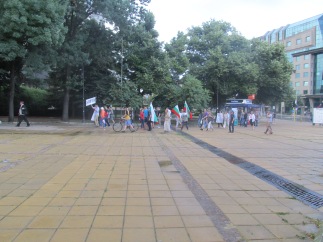 We did eventually got back to the sea in the late afternoon and it started raining really heavily! We were able to get almost the same seat we had the evening before and we didn’t really care that the rainwater came dripping all over the table driven by the wind. We really didn’t mind that unlike an elderly couple that had to change their table. For us it was part of the beauty I guess to see the sea during a storm. Sitting there with an endless grey mass in front of you dancing along to every gust of wind! It’s something that has to be experienced at least once in a lifetime! If you love someone, you have to see them in all kinds of different states and yes, the sea can be like that as well! Beautiful wine again, a nice fish salad and divine fish that we didn’t know we had ordered both as a snack along with fries and as an individual dish! Now when you say fish, that’s the fish I think about! Really amazing fried Bulgarian fish, really small and absolutely mouth-watering! This taste and smell will haunt us forever! Who says that TV travel shows are a cheap alternative to actual travelling is stupid!

It was time for another evening walk (still in our light jackets) and the weather was improving a bit. What is it about a Bulgarian night that takes lots of handsome Bulgarians out? It’s still a mystery to me! There were lots of people lounging in bars, clubs but the whole scene seemed quite peaceful and great for people-watching. There was inspiration in the air again and you don’t have too get rowdy to have a good time being out at night! More midnight people-watching just across the road from the hotel. What the central Varna certainly seemed to be was perfectly safe! Good night and let’s dream of some swimming for the next day!

An English teacher and translator, a keen traveller View all posts by Olga