It was our final day here in Rome. We packed our things and checked if there was anything we had left behind. I did leave my spare pair of shoes behind – I didn’t want to leave! That was it – our beautiful hotel room will become someone else’s beautiful retreat a few hours later. I was already jealous of them! There is something personal and impersonal about hotel rooms at the same time – it might feel as home in a place you are coming to love but it might be baffling just thinking about the number of people who had resided here before. Anyway, whoever they would be, I wished them a great time in the magnificent Eternal City! We arranged with the lovely lady at the reception desk who checked us in on our first day to leave our bags that had grown heavy at the luggage room. It caused us a bit of a laugh as this room looked more like a renovated bathroom but we didn’t mind that much as long as our suitcases were safe in here.
We didn’t have a hotel room but we could have Rome till the late afternoon. My sister suggested we picked up on what we hadn’t got to do the day before – see the mysterious St.Teresa in Ecstasy in Santa Maria della Vittoria. Well, I thought that would be something I would have to leave till I probably came again as I might not find my way there but my sister was in the mood to go so we went! It was a short walk from our hotel. It was early so there were few people in the church. I had been really fascinated by the story behind this sculpture by Bernini. It was in the opening scene of the BBC documentary about about him. It depicts a Spanish nun stabbed with God’s arrow and the state she is in is so intense and it really shows in her face. It’s stunningly sensual and to me it reveals another astonishing aspect of religion taking it out of the traditional context. There are so-called “theatre boxes” on either side showing people watching Teresa as she is getting increasingly aroused by this sensation. It is really extraordinary how Bernini seemed to have challenged the way religion is seen as something shying away from anything explicitly sensual. Staying in this back-door church with a great view of this sensual sculpture was wonderful! We had done that!

We headed along the familiar streets to Piazza della Republica and enjoyed some more of the morning Rome. A part of us was still here and another part knew we would be leaving a few hours later… We checked out a little market and got some things at the staggering 1 Euro! We walked to Piazza del Quirinale and admired some last views of the Dome from up here. Did I really have to leave? It felt more like piecing the memories together now rather than making them… 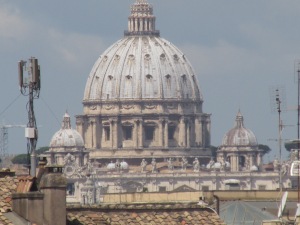 We owed a visit to the Pantheon and that was what we did passing by the snow white monument again… Piazza della Rotunda was just as a few days ago – bustling and busy.When you enter this extraordinary ancient building, all you feel an urge to do is to look up. Yes, this dome! Only the Dome that we had previously admired can compare to it! Just look at the light coming through! It was nothing like I’d seen so far! It wasn’t a church, neither did it feel like a public building. There were tombs of some famous Italians – Vittorio Emanuele II, Raphael… I felt the significance of experiencing this most famous ancient building. It made for a perfect last sight to explore… 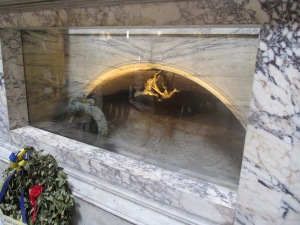 We went to the famous Tazza D’Oro coffee shop for our final coffees. We didn’t expect to be able to afford much but the prices were surprisingly reasonable and the service provided was amazing! Coffees were served from a bar and that’s how Italians prefer it. The staff were very efficient, I have to find out how they pull all of this off – being quick, having a chit-chat with each other, smiling at you, stopping the cutlery from almost falling down and looking drop dead gorgeous! Italian men, I salute you again! The coffee was the best I’d ever tried, by the way! And we got some to take back home. Italians and coffee certainly mix!
A walk back from the Pantheon through the familiar streets till we were back to the crossroad of ages – Via dei Fori Imperiale – to get final views of the snow white Vittorio Emmanuel II Monument where we used to sit almost every night watching the sun go down to give it a pinkish shade. One night right here facing this landmark monument, I got to chatting with a middle-aged Italian and he asked me where I was from and I wished I had been able to scrape my limited Italian together for this but he spoke fluent English and he assumed I had been walking all day (and he used the tense correctly!) and suggested it would be a good idea to come back next summer to see some more. I was sure I had to take his advice on board and come back right here to have a longer conversation and probably in Italian! Yes, it is like music to the ears! I had been in Italy before once but I didn’t really get to hear much of it but now I felt I HAD been in Italy! With my heart, my mind, my eyes, my ears and my palate. More views of the Forum and we were back to our hotel to get our suitcases. 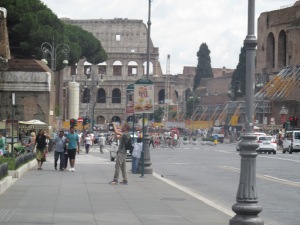 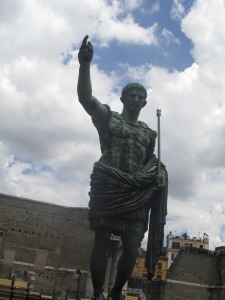 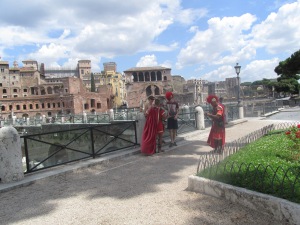 We had a sweaty walk to the railway station to catch a bus to the airport. That was it now… Arrivederci, Roma! A few hours later after standing in line of mostly grumpy countrymen we got on our plane home and there back in Moscow early in the morning. I felt like in a dream oblivious of where I am and who I am… I was experiencing Rome withdrawal symptoms.

One of the things I learnt on this trip was that travelling on your own is amazing and it offers you a whole lot more than being with a group. Doing things at our own pace, walking the streets of Rome enjoying its surprisingly changing weather patterns, resting your feet whenever they take you (usually they were these “public living-rooms” – piazzas), people-watching letting your eyes feast on the world-famous Italian beauty and style just to get inspired to live, to love, to create… Italians seem to take it all to another level. Yes, Rome might not be the cleanest city and the reason behind smiles and charm might have to do with people trying to make a living in tough economic condition but that doesn’t take away from the pure joy of being in the Eternal City and getting your idea of what dolce vita is… It’s there – in the resilience of incredibly ancient buildings, the sun going up and down the Roman sky, a steaming cup of espresso, an irresistable stare of a handsome Italian’s eyes, the overwhelming amount of beauty per square meter… It’s all the art, the art of living life and you want to come again and again to learn more. Italy is a summertime romance I will never forget and I hope I will get infatuated again and again! Bellissima!