Bonjour! Our last quite regular morning in Nice started with some decisions to make on what to do that day. We could go to the neighbouring Monaco or spend the entire day exploring more of Nice. That was the opening day of the European Football Championship here in France and we thought it might get chaotic with traffic and we’d already been in the fairytale-like Monaco so we opted for a day here in Nice. Refraining to see the royal splendour of Monaco – just like that…

Place Massena had already got decorated for today and looked even more beautiful on that perfect sunny morning. I had another cheeky wet walk through the cascades in Le Jardin Albert-I seeing more locals casually strolling or reading newspapers. A beautiful morning in the South of France! We felt instantly part of it as we went to the Apollo fountain and realized that the world-famous Cours Saleya market we saw a sign for was just around the corner. In 1897 the first wholesale flower market in the world was opened here. Before we checked it out, we dropped in one of the shops along the coast selling some small gifts and perfume. Our noses were in need of a souvenir de Nice as well as our vision and mind as they nurture each other collaboratively. 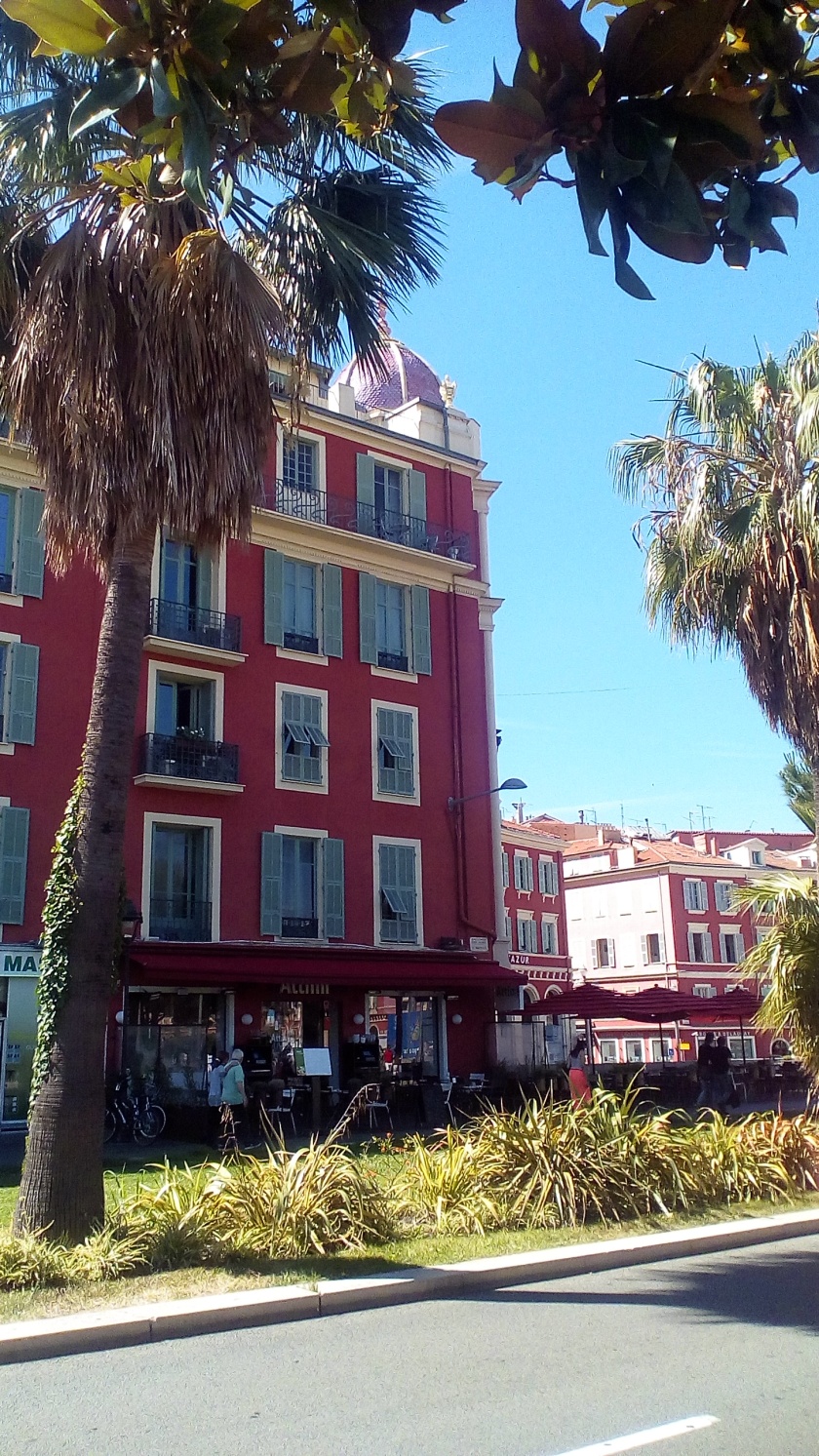 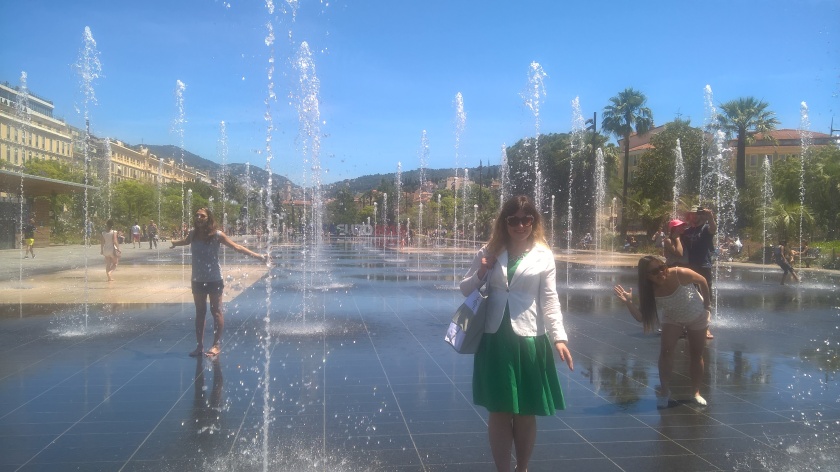 After we’d dropped off our purchases whose enticing smells did a great job inflaming our sensations back at the hotel, it was time to see the market and breathe the smell of Nice more profoundly. Yes, there’s a post-office just at the entrance and I have a few cards to post! It was very interesting to do something locals would do and try my limited French that certainly gave me away but it wasn’t meant not to. The market itself was a life-size landscape blooming with overwhelmingly gaudy colours of flowers of all sorts. I wish I could get some to give Mum who is hugely fond of any sort or shape of floral elegance. I’d rather just admire them than make an effort planting them. The air was infiltrated with the smell of lavender that put a very romantically scented touch on the pile of my memories to inspire me to decorate my room in the Provence style. 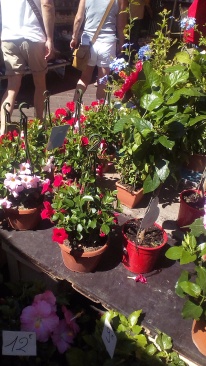 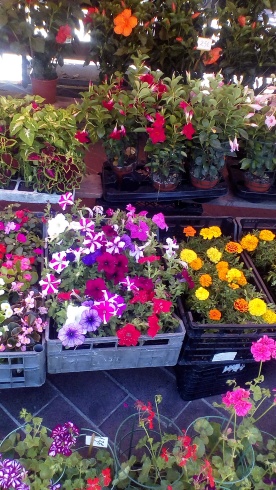 That felt more like a morning of a character of some medieval novel going through their routine grocery shopping. Markets are immense parts of a local culture. Food on sale was plentiful as well. Apricots, apples, cheeses… I couldn’t resist trying a local speciality that has to be eaten here in Cours Saleya. That was typical street food of Nice called Socca – a hot pancake seasoned with paper baked on coals. The one I got was huge but my sister wasn’t willing to try it as well so I had it all to myself! It was very substantial as street food is meant to be! Being here made me wish I could once step out of my house, get myself to this market, buy some fresh ingredients from one of these people I would definitely know by now and cook something very nice back home. We love to dream while travelling! These Provencial dreams infiltrate our mind just as lavender does our senses!

We decided to get back to explore the largest Orthodox Church outside Russia that was here in Nice away from the city centre. For that we had to go back to the Avenue Jean Médecin and walk to the railway station (Gare de Nice-Ville). We stayed for one night in this area on our first time here. Of course this part of the city wasn’t too fancy and there were some suspicious-looking people walking by. It was a bit tricky to find this area and we could see more apartment buildings and obviously non-French people here. There were signs for the church but it wasn’t in our view. The afternoon was getting very hot but we kept walking this less attractive part of Nice. Eventually we did find what is actually now part of our country’s property and it looked so much like Russia. I knew I would be there the following day and wasn’t keen on that but I wanted to experience what it would be like to see it here. The Russian nobility had a good taste for holiday destinations. It was easy to be a patriot from here I guess.

There was a monument to Tsar Nicholas II and some more busts. It felt a bit cynical to be here for a Russian. We didn’t feel like entering the church as we would expect we would find a lot of fellow Russians there and might get some looks from them. This is what I find very oppressing about the Orthodox religion.

We just basked in the sun instead and walked back to Promenade des Anglais. We didn’t want any more homeland to this afternoon in Nice. We stopped by for another rest in a park with huge palm trees where my sister didn’t feel like staying long due to a group of homeless people nearby. Well, we were getting spoiled as back home we wouldn’t even take any notice of these people who weren’t being disorderly. Just around the corner we came across another reminder of Russia that was a grocery shop with a matreshka at the entrance. Our people are notorious for being bad at adapting to their foreign surroundings… 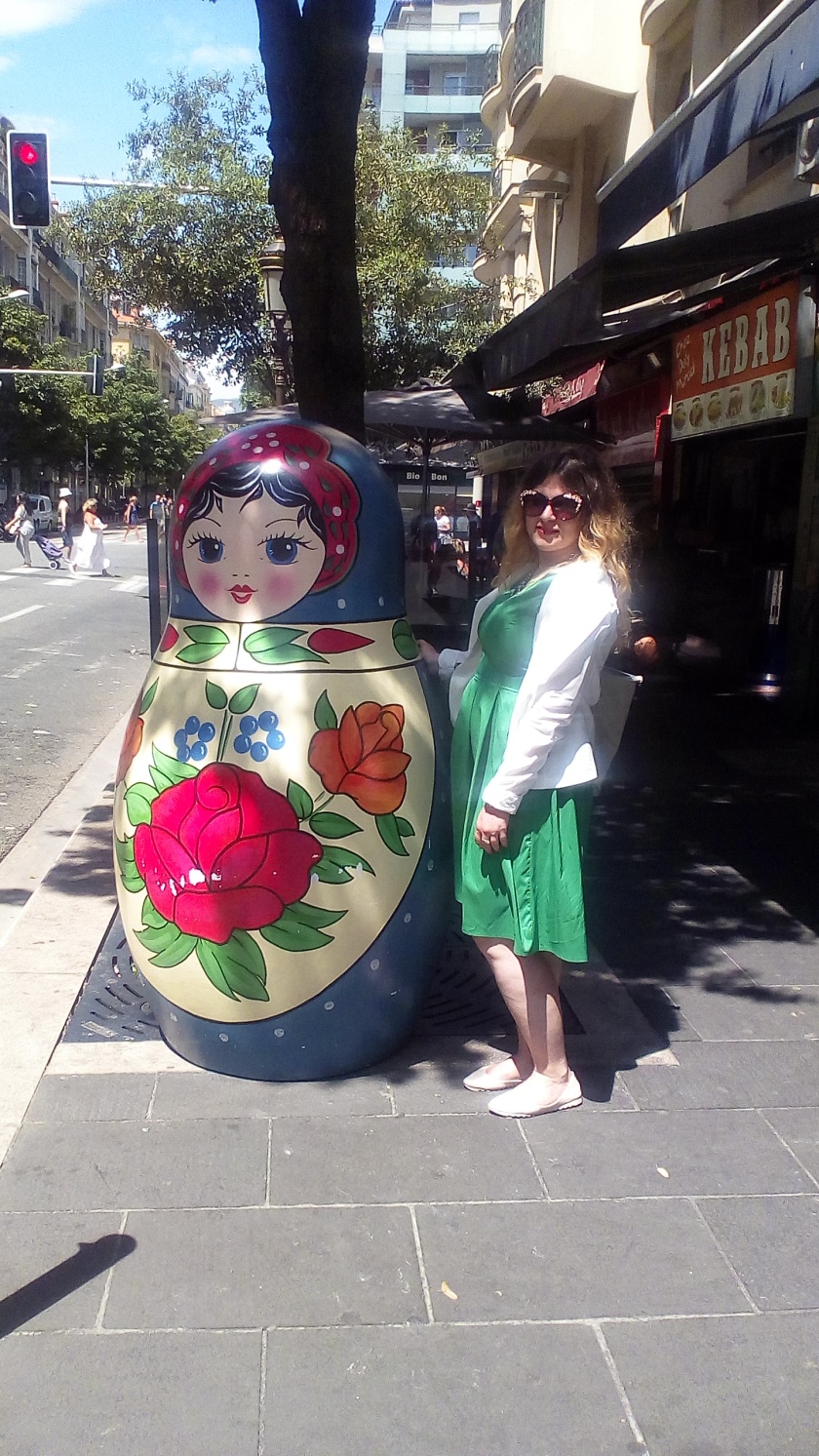 It was time for lunch. We went a bit extravagant and chose a place overlooking the Mediterranean. I ordered some gnocchi (dumplings) that I had been happy to try in Rome. We found a bottle of wine at the astounding 600 euros on the menu! The wine we were having that afternoon was a whole lot cheaper! It was a very pleasurable afternoon we spent watching people coming and going before it was about to get more chaotic in the evening. My sister took advantage of free bread they offer here and asked for a few helpings. It was quite challenging to catch the waiter’s eye (whom she found particularly handsome and I agreed) and we wondered if there had been anyone trying to leave without paying their bill as it was so easy to get lost just into the next corner. Was that something that crossed only Russian minds…? 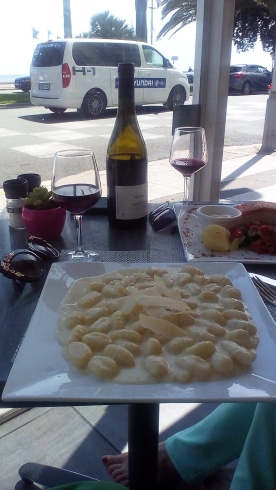 Afterwards we sat a while at the coast and I was sad this time tomorrow I would be back home and there would be no more imposing view of the Hotel Negresco dominating our vision. We sat pensively playing with stones and throwing them into the sea as we watched a very caring father taking his older son (a future male beauty) for a swim. It wasn’t hot enough for that, but the boy didn’t mind and neither did he say anything when his father left him all alone to obviously take the younger boy to use the bathroom. We had to discreetly take a picture of this cute young man. A lot of these handsome men seem to make excellent fathers! We watched some more kids playing in the playgrounds put up to celebrate the start of the Football Championship and we had no doubt that the only loud child would be Russian and he was! They might need these handsome fathers that a lot of them sadly don’t have… As we kept walking, we came across our Belgian colleague with a suitcase in his hand and he instantly recognized us. He would break a lot of hearts back in Russia… 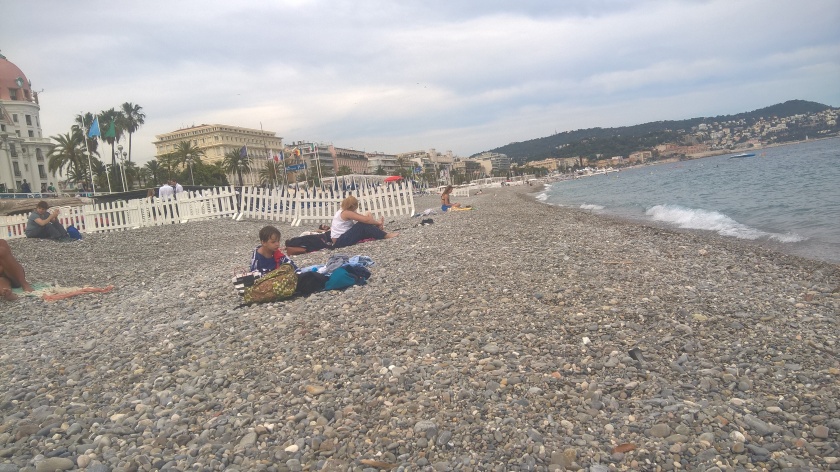 We went back to the hotel for a bit to refresh as the streets were getting filled. In the elevator we came across another male beauty I wish I had been far enough to take a photo but he was just too close in this tiny isolated space. It’s a shame I couldn’t broadcast this image to people back home – they would be very jealous! They would be anyway if they knew how much handsomeness I had been exposed to throughout the course of my stay here in Nice. I’m very skeptical of people saying that looks don’t matter that much. In Russia it sounds more like a consolation as one might end up single forever (which is deemed as a major failure in our country) if they make this a prominent criterion in choosing a partner. But what is wrong in wanting beauty in your life – just seeing a smile on a handsome face is enough to light up the soul with that flirty life-boosting spark! Humans crave and thus gravitate to beauty in all of its shapes and forms. I guess girls like myself who have very handsome fathers and their romantic and sensitive minds from them tend to romanticize male beauty. So excusez-moi if there have been too many accounts of niçoise males on this trip. This is one thing I’ll always be on the lookout for even when I’m old and grey as those ladies I saw at the restaurant the day before (as long as my eyes can see and my soul get inflamed).

As we got back to the promenade area, we thought it was a perfect time to climb the Castle Hill (Colline de Chateau) and the adjoining Castle Park (Parc du Chateau) and get a closeup of postcard views of Nice showing the Bay of Angels (La Baie des Anges). That was a rather sweaty walk up but we kept stopping to get different perspectives on the view and each time what we saw was purely splendid! There is no more castle here as it was destroyed in 1705 as ordered by Louis XVI. The view I got took my breath away and stole a huge segment of my memory to be stored there forever! Wow! We were about to take a picture of us here when we saw a man rushing towards us. We thought something was wrong but he turned out to be eager to take a picture of us and thought we were English! 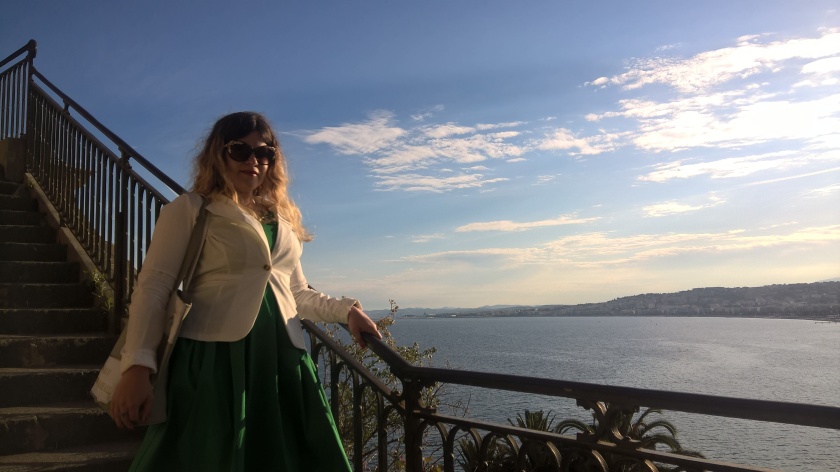 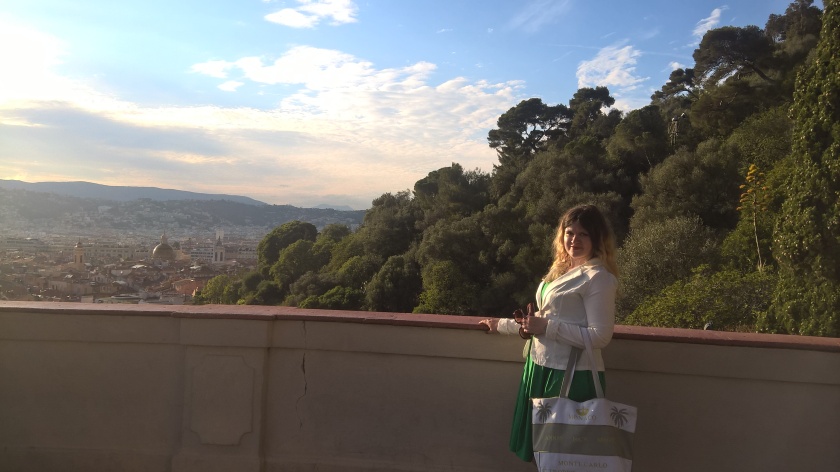 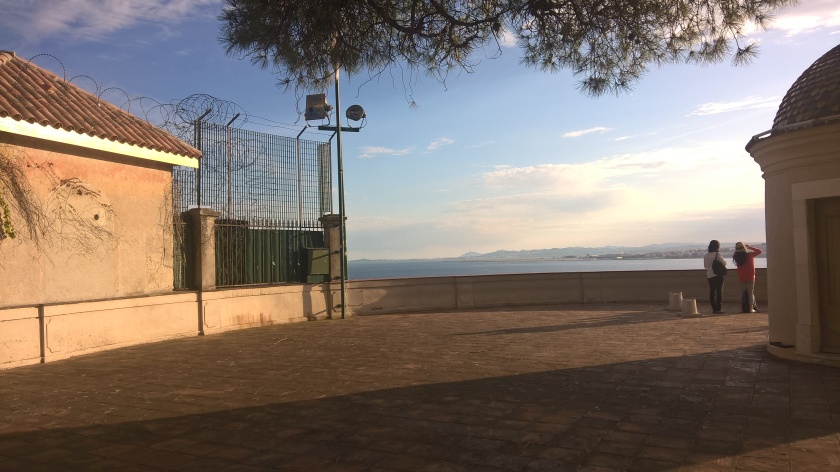 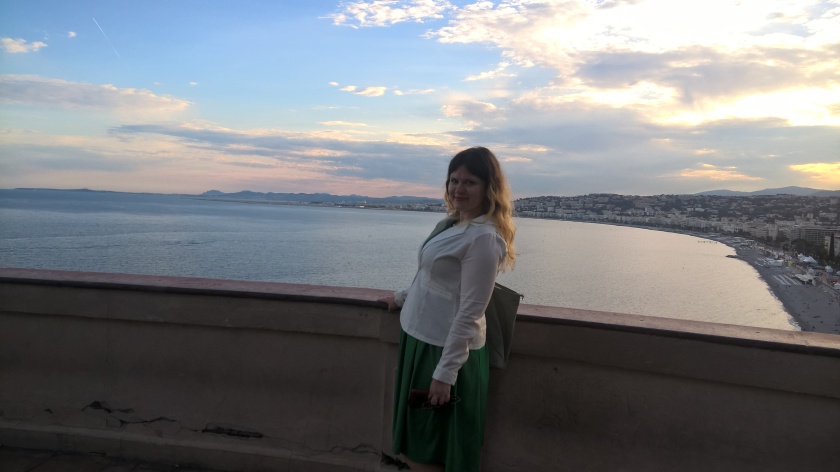 As we went down, we saw French people waving national flags and getting ready for the game. We decided we would stay in the beach and hear the reactions from there enjoying our pique-nique of fruit and wine. There were so many airplanes in the sky that evening and I was standing with my feet in the water watching one gliding by – romantique! France won that night and we did get to watch the final minutes of the game on a large screen in Place Massena and I got joined by a French man providing very emotional comments and the only thing I understood was a French swear word and something we would call “core vocabulary”. 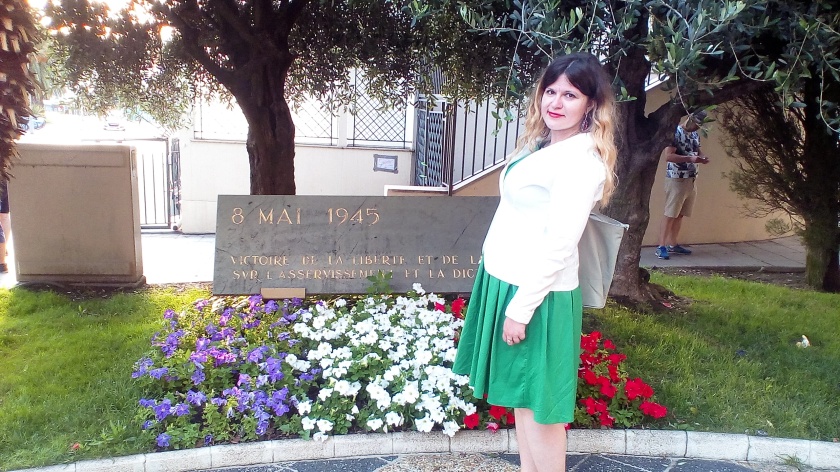 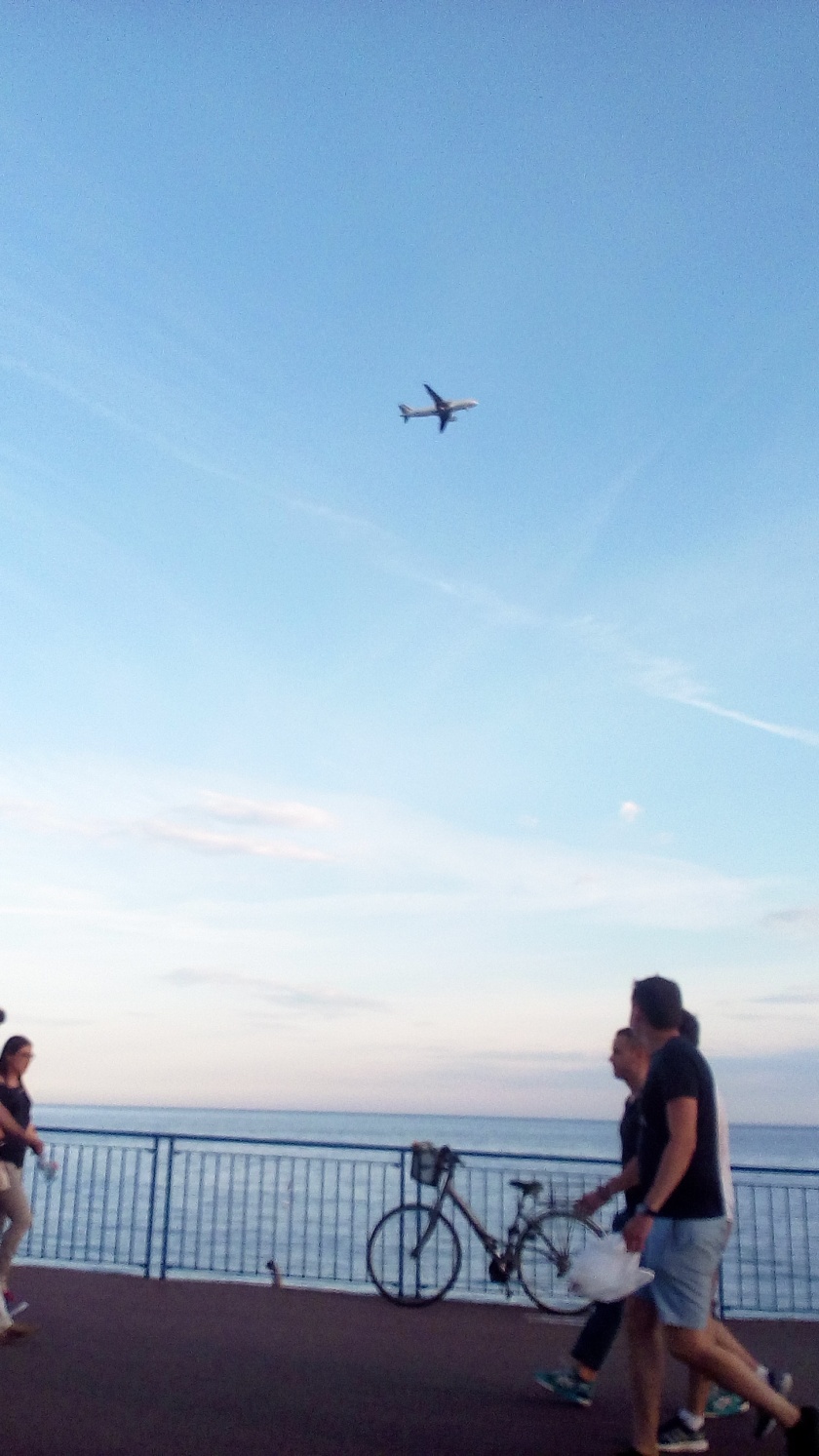 As I was finishing on my sister’s sandwich, I got a few looks from people in a festive crowd and admired watching a group of young men admiring young girls walking by – that’s what it was originally supposed to be and all got twisted in the process. I was high-fived by a guy in the crowd and it was fun! No one got disorderly and the police presence was very significant. I couldn’t get enough of our final night here. I’d got used to hanging out in this squire every night sipping on my coffee and people-watching breathing this revitalizing Mediterranean air… I congratulated the hotel receptionist and his handsome friend on their win! It’s amazing how sport brings people together. I miss you already, Nice! Bonne nuit!